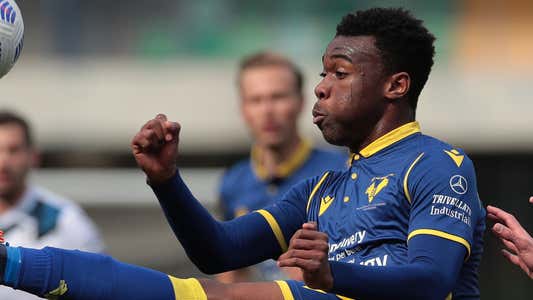 Nigerian prospect Destiny Udogie has caused a stir on social media after announcing that he would love to play for the Azzurri and not the Super Eagles as he feels more Italian.

The 19-year-old, who plays as a left-back for Serie A club Udinese on loan from Hellas Verona, was born in Italy but is of Nigerian descent.

“I was born in Italy so I feel more Italian. I grew up playing with the young players in Italy so I want to continue with Italy,” the teenager told Carlo Garganese and Nima Tavalley on The Italian Football Podcast.

Some supporters have not taken Udogie’s sentiments lightly stating that the West African nation does not need his services.

“Nigeria have so much talent at their disposal, their decision has no effect on them, they just need a good technical team to build their squad” -Nanor Harris

“So what’s holding him back since he’s not playing for them. He’s free to play for them, no one is begging him to play for Naija or does he want us to start begging him? If he is good enough, why does it take long to play for Italy” -Kelechi Ukaegbu

“He’s trying to get attention. We don’t need those kind of players. He should go and ask [Tammy] Abraham and [Fikayo] Tomori who feels more English” -Ugwu Simon

“He should remember he said that oooh!! He shouldn’t come back to post ‘No place like motherland’ after he didn’t get a chance to play in the Italian national team. Good luck to you man…i hope you succeed” -Nkesọsọchukwu Nwachukwu

“This is how they behaved if Nigeria had qualified for Qatar, they would have rushed to play for Nigeria at the world cup. Players who said they did not feel Ghanaian in the qualifiers are now changing their nationality in order to play for Ghana at the World Cup” -Salomon Jentina

Some people felt the defender made the right decision and shouldn’t be forced to play for the Super Eagles.

“The choice is freedom, it feels Italian and it looks Italian, it’s the closed debate, the more local talent will have a win-win chance for the ends” -Hassan Muhammad Adji

“It’s his choice. If he was born there and he feels it. It would have been different from being born in Nigeria and going to Italy. But Italy is not easy to playing for a black man, even if he was born in Italy. But at the same time he can enjoy it and break down barriers” -Kwabena Ahenkorah

“Good luck Mr. Not everyone can play for Nigeria. Some players will want to play at all costs and some won’t even if they are invited. It doesn’t matter!” -Ojo Adebayo Olusoji

“You don’t blame him for anything, if we Africans developed our football professionally and free from corruption and violence, we wouldn’t need these players” -Joseph Krampah