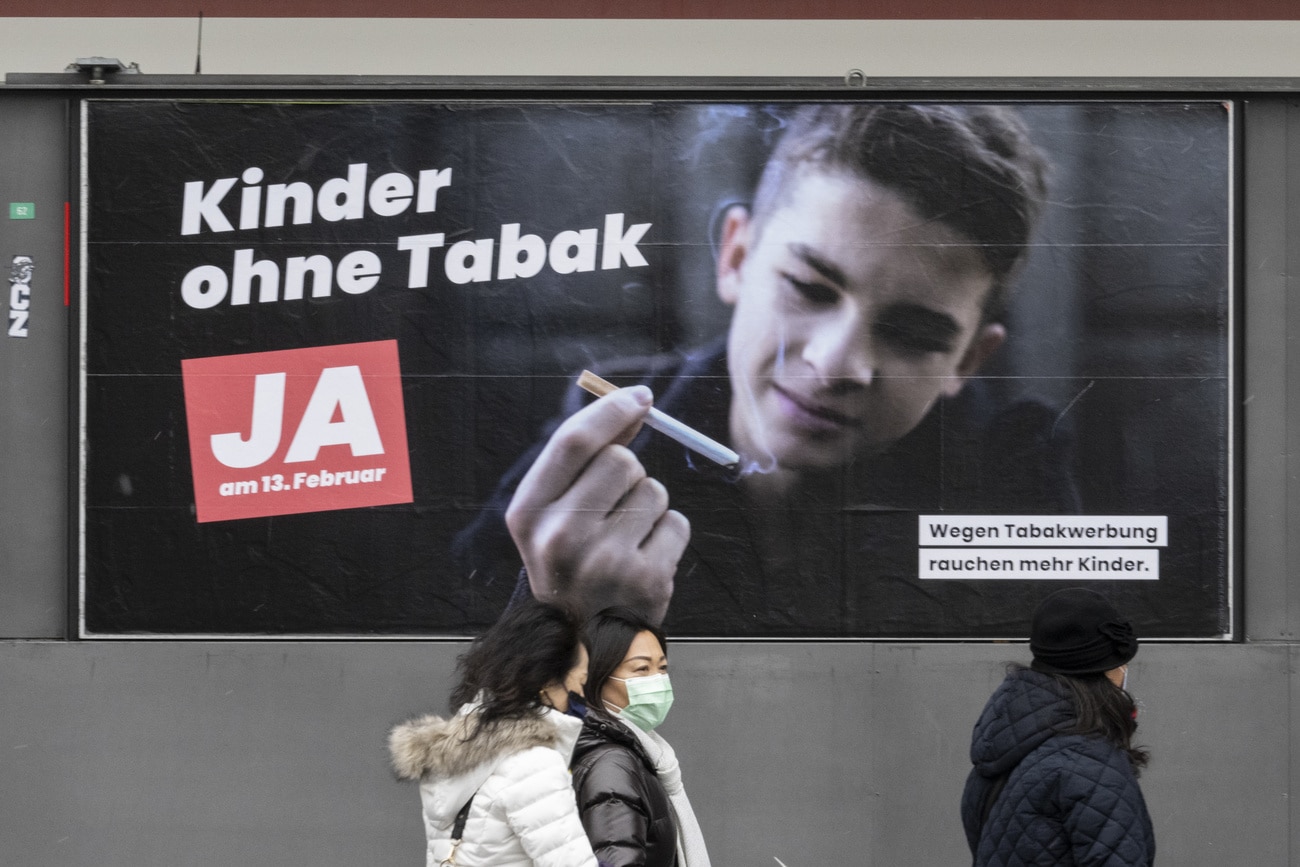 Voters agreed to limit advertising for tobacco products that can be seen by young people in Switzerland.

Born in London, Simon is a multimedia journalist who has worked for www.swissinfo.ch since 2006. He speaks French, German and Spanish and focuses on science, technology and innovation issues.

More from this author | English department

On Sunday, 56.6% of voters supported the popular initiative “Yes to the protection of children against tobacco advertising”. A majority of the country’s 26 cantons also backed the proposal, allowing it to pass.

Residents of French- and Italian-speaking townships and urban areas backed the call for tougher restrictions on advertising. Several German-speaking cantons in central and eastern Switzerland opposed the initiative.

Grégoire Vittoz, director of the NGO Addiction Suisse, said the result marked a “big step forward” in the fight against smoking in the Alpine nation, home to the world’s biggest cigarette companies, Philip Morris International and British American Tobacco, and currently has some of the weakest tobacco advertising laws in Europe.

“It’s a clear message from the people in parliament that we don’t want the current legislation. We want to protect our children,” Vittoz told Swiss public television RTS.

“The people have understood that health is more important than economic interests,” Stefanie de Borba of the League Against Cancer told the AFP news agency.

Around one in four people in Switzerland smokeExternal link – a stable trend over the last decade – while the figure is slightly higher among 15-24 year olds (31.7%). Research shows that most adult smokers (57%) started when they were underage.

The health and youth organizations behind the initiative convinced citizens to support a ban on all tobacco advertising that could reach young people in Switzerland, including those for e-cigarettes.

Currently, tobacco advertising directly targeting minors in Switzerland is prohibited. Cigarette advertisements are generally banned on television or radio. But in cinemas, public spaces, at festivals or on public transport, practices vary from one region to another. And hardly any canton prohibits cigarette advertising in the print media or on the Internet.

Opponents of the initiative were disappointed with Sunday’s result.

“Today we are talking about cigarettes, tomorrow it will be alcohol and meat. It annoys me to live in a society, which I call politically correct, where everything must be regulated,” Philippe Bauer, senator from Neuchâtel, told RTS on Sunday.

Critics, who included government, parliament and the advertising industry, argued unsuccessfully that the text was too extreme, an intrusion on economic freedoms and difficult to implement in the digital age.

Instead of the “more radical” initiative, they had pushed for an indirect counter-proposal based on the new tobacco products law, approved last October, which they said would have effectively protected young people while preserving the economic interests.

The counter-proposal would have imposed stricter restrictions on tobacco products but would still have allowed advertising at points of sale such as kiosks, or in the press, on the internet and on national holidays (unless they were organized especially for minors).

Health Minister Alain Berset told a press conference in Bern: “We have to admit that the counter-proposal was not considered sufficient.”

According to the text of the initiative, only tobacco advertising directly targeting adults should be allowed, such as in magazines, flyers, targeted emails and Internet content designed for adults.

The federal authorities must now implement the new requirements of the initiative and adapt the law on tobacco products accordingly.

Berset told reporters in Bern that the implementation should be done as soon as possible, but it was unlikely to be completed this year.

“A bill must be drawn up, submitted for consultation and discussed in parliament. The adopted law must then be submitted to an optional referendum. An entry into force this year is impossible,” he said.

It will also be an opportunity to discuss again Switzerland’s future ratification of the World Health Organization (WHO) Framework Convention on Tobacco Control (FCTC), Berset said.

About 5.3 million Swiss citizens, including registered Swiss expatriates living around the world, were eligible to participate.

The votes were the first in a series of up to four national polls this year.

A series of votes at the cantonal and local levels were also scheduled for February 13.

What to cook this week