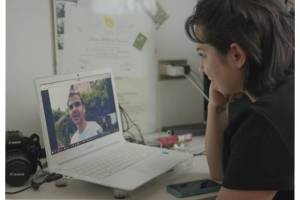 BUCHAREST: Italian director / screenwriter Elena Rebeca Carini is currently in production with her feature-length documentary The land you belong to, which began shooting in November 2021. This Italian-Romanian co-production received a EUR 65,000 grant from Eurimages during its last call in December 2021.

Elena, Italian by adoption but born in Romania, is about to turn 30 and feels the need to discover the missing piece of her story: her biological family. To do this, she decided to take a road trip from Piacenza to Bucharest with an unusual and surprising travel companion: her new brother Gérard. The film will be an adventure on the road, a journey which, through the search for their origins, traces the last 30 years of European history, studying the evolution of words like “Union”, “Borders” and “Identity. “.

Matteo Pecorara produced via Small Boss Productions in Italy in co-production with Irina Malcea of ​​Luna Film in Romania. The budget is 268,282 euros, of which 80% is in place, Irina Malcea told FNE.

The project is supported by the Regione Emilia-Romagna, the Italian Tax Credit, the Romanian Cinema Center (CNC), Eurimages and Al Jazeera Documentary.

Filming took place in November 2021 and will continue in February 2022. The film is shot in Italy, Hungary, Slovenia and Romania, with 70% of the shooting in Romania. Romanian DoP Carmen Tofeni is eyeing. Tofeni was nominated as Best Director of Photography at the 2021 Gopo Awards for Ivana the Terrible directed by Ivana Mladenovic and produced by microFILM (Romania) in co-production with Dunav1984 (Serbia).

The land you belong to should be completed in fall 2022. The premiere is not yet confirmed. CATS & DOCS manages sales. Local distributors in Italy and Romania are not yet known.