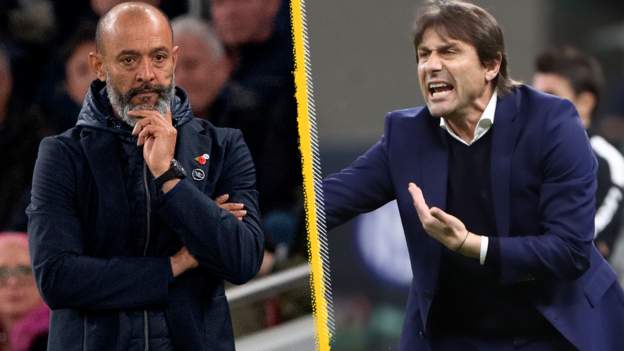 They are eighth in the Premier League, 10 points behind leaders Chelsea.

“I regret that we had to make this decision,” said football general manager Fabio Paratici.

“I know how much Nuno and his coaching staff wanted to be successful.”

The Portuguese, 47, was appointed manager of Spurs with a two-year contract in June after four years with Wolves.

“Nuno is a true gentleman and will always be welcome here. We would like to thank him and his coaching staff and wish them good luck for the future,” added Paratici.

Tottenham have said a decision on Nuno’s successor “will follow in due course”.

Italy’s Conte, 52, has been out of work since leaving Inter Milan in May, just weeks after leading the club to their first Serie A title in 11 years.

He won the Premier League and the FA Cup at Chelsea, but was sacked in July 2018 after a disappointing second year in charge.

The former midfielder also led Juventus from 2011-14, winning three Serie A titles, and taking charge of the Italian national team from 2014-16.

Spurs negotiated with Conte after Jose Mourinho left in April, but chose not to strike a deal amid concerns over the Italian’s demands.

Conte is believed to want to return to management and he does not appear to be at the top of the list of potential candidates to replace Ole Gunnar Solskjaer, if the Norwegian manager leaves Manchester United.

Spurs, who were booed after the 3-0 home loss to United, have started the season well and having won their first three league games Nuno has been named Premier League manager of the month of August.

However, the results started to suffer. Despite wins against Aston Villa and Newcastle in October, there have been losses to Chelsea, Arsenal, West Ham and Crystal Palace, as well as a Europa Conference League loss to Dutch club Vitesse Arnhem.

The Portuguese left north London with a record of eight wins, two draws and seven losses in all competitions.

The decision to sack Nuno was made due to a combination of mixed results, style of play and fan reaction.

There is sympathy internally as Nuno did not come at the easiest time and had to deal with many difficult situations including the summer transfer saga involving Captain Harry Kane.

The Tottenham Hotspur Supporters’ Trust said Nuno had “behaved with integrity, good grace and civility” during his time at the club, but added that the former Wolves boss was “clearly not the right fit for Tottenham “.

He continued: “Fans are increasingly concerned about the direction of the trip to Tottenham Hotspur.

“Over the past two years, there has been a clear regression.”

Tottenham have carried out a difficult and lengthy search for a new manager this summer following Mourinho’s sacking.

They got in touch with Paris St-Germain boss Mauricio Pochettino about the possibility of the Argentine returning to handle them, but the French club were not ready to let him go.

Conte seemed ready for the role, only for talks between the Italian and Spurs to break down.

Former Roma manager Paulo Fonseca then thought he was taking over, only to be sidelined in favor of Gennaro Gattuso, who was dismissed when fans reacted badly to the existence of social media posts questioning the Italian commitment to inclusiveness.

No sooner was Nuno named than he had to face speculation about Kane’s future, but the Spurs and England captain remained, and a Day 1 victory against the champions Manchester City seemed to have set the tone for a positive season.

However, he has failed to make the most of his star players, most notably striker Kane who has only scored one Premier League goal this season.

Nuno Espirito Santo’s sacking is the conclusion of a chaotic episode that arguably reflects worse on Tottenham chairman Daniel Levy and his board cohorts than on the outgoing director.

Nuno didn’t last much longer than the time it took for Spurs to decide on appointing him after a horribly botched and drawn-out managerial search in which potential candidates seemed to appear and disappear in the blink of an eye.

The Portuguese ran out of steam at Wolves after an exceptional reign, starting at the end of last season, and his counter-punch football style, well known to anyone who had watched Wolves, was clearly ill-suited to all The positive football speech that Levy had promised in succession to José Mourinho.

Nuno has also had to deal with mending Harry Kane’s relationship with the club as the forward’s form continues to stabilize.

A good start couldn’t hide the sterile approach and problems came to a head when Spurs fans angrily turned on Nuno and Levy in Saturday’s 3-0 home loss to Manchester United. Now the search for Spurs is starting again.

This can be seen in two ways. It’s either a rush of panic after just 10 league games, or the early recognition of a catastrophic mistake – in any case, many will feel more sympathy for Nuno than for Daniel Levy.