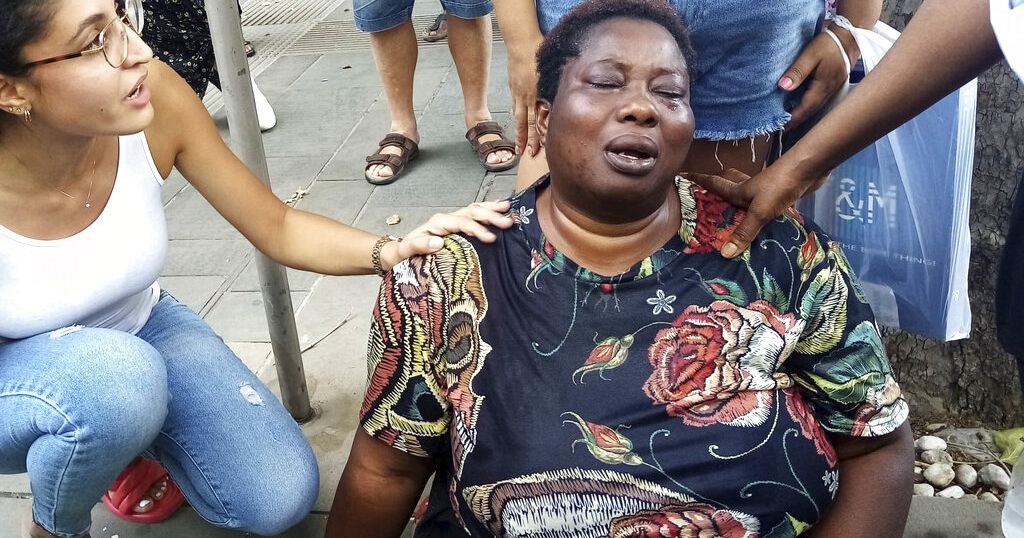 Nigeria. A woman demands justice after the murder of a street vendor in Italy

The wife of a Nigerian street vendor called for justice on Sunday after the murder of her husband in Italy, which was caught on camera by passers-by and sparked national condemnation.

Alika Ogorchukwu, 39, was selling goods Friday on the main street of Civitanova Marche, a seaside town on the Adriatic Sea, when her attacker grabbed the vendor’s crutch and beat him, police said.

“The assailant pursued the victim and first hit him with a crutch, then threw him to the ground, then finished him off, killing him by hitting him repeatedly with his bare hands.”

An autopsy later in the week will help determine if Ogorchukwu succumbed to beatings or was strangled as he lay with his back to the ground. Police used street cameras to track the assailant’s movements and arrested a man identified as 32-year-old Filippo Claudio Giuseppe Ferlazzo.

He was suspected of murder and robbery for allegedly taking the victim’s phone. Luconi said the attacker went on a rampage after the salesman made “insistent” demands for change. Police were interviewing witnesses and viewing videos of the attack.

Ogorchukwu, who was married with two children, resorted to selling goods on the street after he was hit by a car and lost his job as a laborer due to his injuries, said Daniel Amanza, who runs the ACSIM association for immigrants in the Marche region. province of Macerata. Hundreds of people from the Nigerian community and Italians, including Orgorchukwu’s wife, Charity Oriachi, demonstrated in Civitanova Marche on Saturday.

Francesco Mantella, a lawyer who helps Nigerians in the country with different cases, said: “It’s horrible. No one is helping to stop this murderous rage against him. This shameful indifference must be investigated. This shows that there is no longer any sense of citizenship, sensitivity and solidarity.”

Reaction to the Politicians Incident

Roberto Speranza, Minister of Health and member of the left-wing Articolo 1 party, said on Twitter: “The brutal murder of Alika Ogorchukwu in the street of Civitanova Marche is shocking. The indifference to the incident is as serious and inexcusable as the violence. .”

Former Speaker of the House of Representatives and Democratic Party MP Laura Boldrini said: “A man was killed in Civitanova Marche with brutal violence while witnesses were filming. Racism and anger are surging against the weak. The worst aspect of society; discrimination and oppression.”

Matteo Salvini, leader of the right-wing League party, known for his anti-immigration thesis, said: “It’s madness to die this way. I hope whoever did this will receive the most punishment heavy as possible.”

Francesco Acquaroli, president of the regional government of the Marches of the far-right Brothers of Italy party, expressed his condolences to Alika’s family in a statement on the incident and said: “In this matter we will want to intervene in as a civil party in the trial to be opened in order to defend the identity, values ​​and image of Marche. We have always been and want to remain an inclusive and supportive community.”