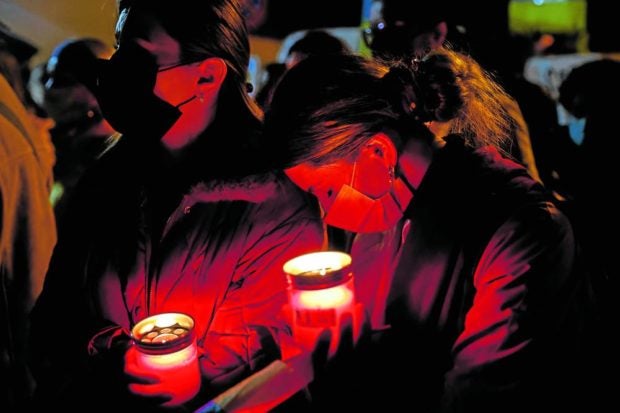 ANTI-INVASION DEMONSTRATION | Ukrainians living in Malta and their Maltese supporters protest against the invasion of their country by Russian forces at the Moscow Embassy in Kappara, Malta on Friday. (Reuters)

Russia, predictably, on Friday vetoed a UN Security Council resolution that “deplores in the strongest terms the country’s ‘aggression’ against Ukraine and demands the immediate withdrawal of its troops.

Eleven of the 15 council members voted for the motion, which was co-authored by the United States and Albania. China, India and the United Arab Emirates abstained.

Following the veto, Britain’s Ambassador to the United Nations, Barbara Woodward, said: “Make no mistake, Russia is isolated. He has no support for the invasion of Ukraine. Russia’s isolation and exclusion are becoming increasingly evident on various fronts, from sports to music to social media.

International sports bodies were among the first to move quickly to strip Russia of events.

The International Olympic Committee (IOC) has urged international sports federations to move or cancel sporting events currently scheduled in Russia or Belarus, which were used by Russian forces to invade Ukraine.

Unable to use events

Among the most prominent sporting bodies that took action were those for football, judo, motor racing and chess.

The decision was greeted with regret by the Kremlin but welcomed by British Culture Secretary Nadine Dorries.

“Russia must not be allowed to exploit sporting and cultural events on the world stage to legitimize its unprovoked, premeditated and unnecessary attack on a sovereign democratic state,” Dorries said.

After Poland, Sweden and the Czech Republic refused to play World Cup qualifiers in Russia, UEFA said that the home games of Ukrainian and Russian clubs and national teams participating in the competitions of the UEFA would be played at neutral venues.

Formula 1, motorsport governing body FIA, and the teams discussed Russia’s actions and came to the conclusion that it was “impossible to stage the Russian Grand Prix under the current circumstances”.

The race was scheduled for September 25 at Olympic Park in Sochi.

The International Judo Federation (IJF) has announced that it has canceled its May 20-22 Grand Slam event in Kazan, Russia, but in a brief statement IJF President Marius Vizer did not makes no reference to Russia or Ukraine.

The International Chess Federation (Fide) has said that the Chess Olympiad and the Fide Congress will not take place in Moscow later this year and that it is doing “everything possible to find another organizer for the ‘Olympiad”.

The Russian space program has also been affected by European sanctions.

An agreement between the European Space Agency and Russia has allowed Russian Soyuz launchers to use the European spaceport in French Guiana as a launch base.

Cultural and musical performances are not spared.

The Eurovision Song Contest has announced that no Russians will be allowed to enter this year’s contest following the invasion of Ukraine.

“The inclusion of a Russian entry in this year’s (Eurovision) competition would bring the competition into disrepute,” the European Broadcasting Union said in a statement.

The Royal Opera House in London announced on Friday that it was canceling a season of performances by the famous Bolshoi Ballet of Moscow following the attack on Ukraine.

In Germany, famed Russian conductor Valery Gergiev, a close supporter of Russian President Vladimir Putin, has been told to speak out against the invasion or risk losing his job as conductor of the Munich Philharmonic Orchestra.

Gergiev is also under pressure in Milan, where he is currently conducting Tchaikovsky’s “The Queen of Spades” at the Teatro alla Scala, to denounce the Russian invasion of Ukraine.

If he doesn’t, “the collaboration will be over,” Italian media quoted the mayor of Milan as saying.

In New York, Manhattan’s Carnegie Hall cut Gergiev from its lineup this weekend “due to recent world events,” according to a spokesperson Thursday.

He is also on deck to conduct the Mariinsky Orchestra at Carnegie Hall in early May.

Russian pianist Denis Matsuev – another Putin supporter who was due to perform solo with the Vienna Philharmonic Orchestra on Friday – was also excluded from the performance.

Social media networks, which host sometimes misleading information but also real-time monitoring of the rapidly developing conflict, have become one of the battlefronts of Russia’s invasion of Ukraine.

Facebook on Friday limited the ability of Russian state media to make money on the social media platform “anywhere in the world”, said Nathaniel Gleicher, head of security policy at the social media giant, on Twitter.

Its parent company Meta said on Friday that Russia would impose restrictions on its services after it refused an order from authorities to stop using fact-checkers and content warning labels on its platforms.

Russia’s media regulator earlier said it was limiting access to Facebook, accusing the US tech giant of censorship and violating the rights of Russian citizens.

Moscow is also increasing pressure on domestic media, threatening to block reports containing what it describes as “false information” regarding its military operation in Ukraine.

Meta’s head of global affairs Nick Clegg said ‘ordinary Russians’ use Meta’s apps – which include Instagram, WhatsApp and Messenger, as well as Facebook – to ‘express themselves and organize for action and that society wanted them to continue doing that.

Alphabet Inc.’s Google said it removed hundreds of YouTube channels and thousands of videos in the past few days for violating its policies and continues to research and disrupt misinformation campaigns and piracy . Google is also weighing what new sanctions and export controls could mean for the company, spokeswoman Ivy Choi said.

Twitter Inc. said users in Russia and Ukraine will no longer see ads — an attempt to avoid distracting from public safety messages — and they won’t receive featured tweets from accounts they don’t follow in the purpose of limiting the dissemination of abusive content.

Kremlin says Russia will impose retaliatory sanctions on the West