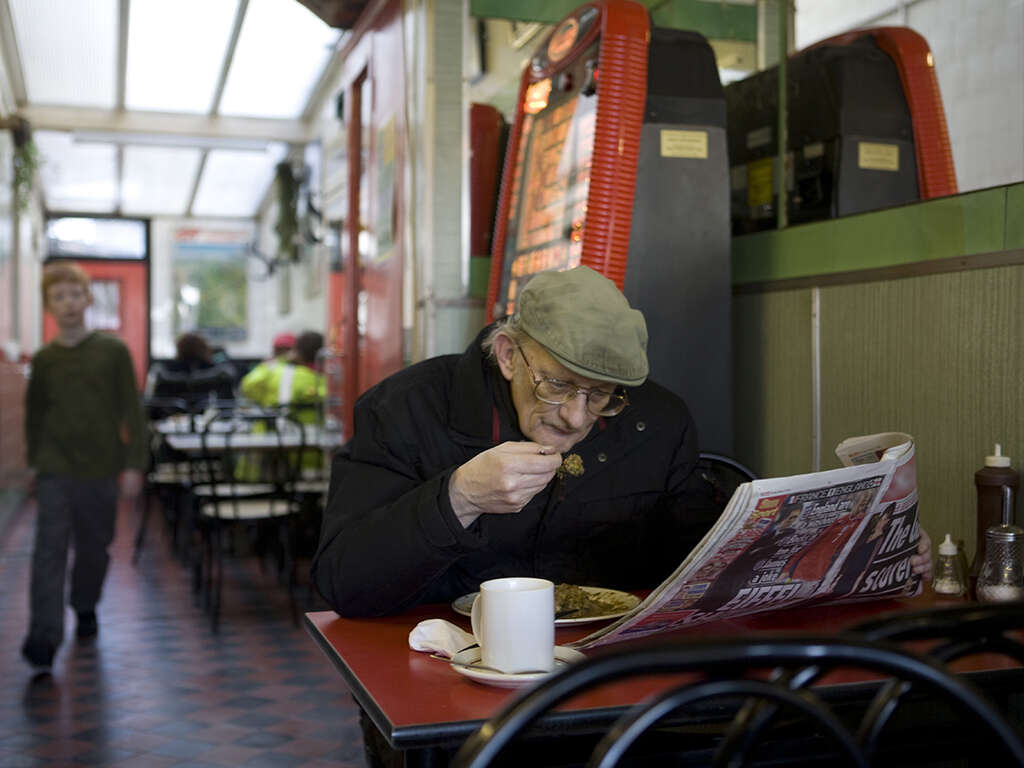 It took a few months after the end of the last lockdown for my cafe to reopen. I practically ran there on our first day of freedom, then found myself pressed against the glass like a little boy in a cartoon wanting to buy some candy after school.

I passed a day, weeks later, and saw the light inside. I rushed inside, got a coffee and went to sit in the back. I started crying before I even reached the seat. They weren’t sad tears or happy tears; I’m still not sure what they were. I was just relieved, I guess – I was finally home.

I’m at my cafe as I write this – it was empty when I arrived and now it’s full. It started raining an hour ago and people have been flocking ever since. They are young and old; alone, in pairs or in groups; well off or quite obviously out of luck. They are just people.

I’ve gotten to know some of the other regulars since I became one myself about five years ago. There’s a pensioner who likes to go to the seaside on his own and a lecturer who’s frustrated with grading essays and a poet with an adorable child and a very tall man who clearly loves his shaggy little dog.

We’re not friends, but we’re not strangers – sometimes we know what the other is doing for a living, sometimes it’s not something that’s ever been discussed. Often, we chat about the neighborhood: which businesses are doing well, which are not. Most of them are bad right now.

There is an Italian grocery store around the corner and I had to stop going there as they raised the prices. I try not to walk past too often because I’ve loved the owner over the years and I think he loves me too, and it’s embarrassing for everyone involved that I walk past and I do not enter.

There’s a new Venezuelan restaurant down the street and I’m avoiding that too, which is a shame because I had started to like the guy who runs it, and I think he had started to like me too . It had to raise its prices just a few months after opening so I can’t get in anymore.

I wonder where all these people will be by this time next year. We talked, in a low voice, about coffee in financial difficulty since the pandemic. There used to be a bakery in the neighborhood but it closed a few weeks ago. It was sad and disturbing; we all thought the bakery was working well, but clearly it wasn’t working well enough. What will happen to places that don’t even seem to be doing well?

It’s what I think about every time I walk down the street and greet people I’ve come to know just because I live nearby. It’s also what I think of when I see commentators and politicians talking about the Somewheres and Anywheres, the dreadful Citizens of Nowhere, the Rootless Metropolitans, the Smug London Liberals.

It’s become fashionable not to like us, to say that nothing really interests us, that we could live anywhere as long as there are baristas willing to do our complicated coffee orders. It’s much better, they say, to live in a community and feel like you belong, to mingle with young and old and feel anchored in a place.

This is what Brexit was about, and perhaps even what the 2019 general election landslide was based on. Let’s stick to these Londoners; we don’t want to become like them. Well, that’s certainly how I felt.

It’s just not the London I recognize. Yet I fear this is what London will become if things continue as they do. If energy bills continue to rise, cafes and delicatessens will have to raise their prices and most people won’t be able to get there. If inflation continues to worsen, people will stay home instead of eating and drinking in restaurants.

If rents continue to rise, people will have to move out of the neighborhoods they live in and they won’t bother getting used to their new neighborhoods, because who knows when they’ll have to move again. If all this continues, London will become what haters think it already is: shiny but soulless.

I have no idea what we can do to prevent this. As with so much else right now, it’s easy to feel helpless. I might try to save elsewhere and go back to Italian and Venezuelan, and go back to ordering pastries with my hot coffee drinks. I can’t really afford it, but if the money is spent, it can be earned again. If a community disappears, it is gone forever.

[See also: Why we can’t blame Covid for the state of schools]