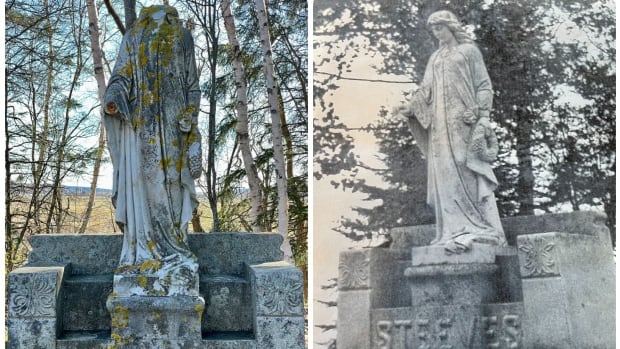 For more than two decades, a headless Italian white marble statue of a young woman has stood above Gray’s Island Cemetery in Hillsborough, inspiring urban legends and ghost stories.

But this week, the long lost head of the century-old monument was there.

The return intrigued the closest living relatives of the woman buried in the cemetery.

Jennie Steeves was the daughter of an aunt of Kathleen Wallace’s father. Wallace recently saw a photo of the monument on Facebook, which took her by surprise.

“It showed the statue with the head next to it, that the head had been returned,” she said.

The monument was erected on the family grave, approximately 25 kilometers south of Moncton, in memory of Jennie.

Born in 1885, she was the daughter of Archie and Laura Steeves. With family ties abroad, she left for London at the age of 14 to continue her studies.

But Jennie fell ill, catching what her family believed to be tuberculosis. She returned home to Hillsborough and died of the disease at the age of 15 in 1900. Her obituary described her as a girl with a “gentle character” and a “kind, gentle spirit”.

In the 1930s, her mother, Laura Steeves, erected a large monument for her only daughter, constructed from imported marble that arrived in the village by train.

“It was really heavy, and they weren’t sure how they were even going to get it to the cemetery,” Wallace said in an interview at his 19th-century farmhouse.

The statue at Gray’s Island Cemetery in Hillsborough has been the subject of urban legends, ghost stories and, now, mystery. 2:40

The cemetery on the outskirts of Hillsborough is where dozens of the Steeves family are buried. The name comes from a land grant granted to a certain Mr. Gray, on a large hill once surrounded by rising tides – becoming an island.

After the construction of the dikes, the cemetery became accessible at all hours along a long dirt road leading far from the center of the village.

Over time, the statue nestled in the far corner of the cemetery has won over New Brunswickers and cemetery historians alike.

He appeared on websites for allegedly haunted places and inspired the myth of the ghost of Gray’s Island. People claimed that the eyes would follow visitors around the tombstones and turn red.

“There were all kinds of stories told about the monument – that it was haunted, that the eyes had rubies in it – but none of that is true,” Wallace said. “It was just put there for the family plot and especially in memory of Jennie.”

Wallace and his sister visited the monument when they were young, while his father cut the grass around the family plot. It was then that he began to suffer from acts of vandalism.

“We used to come down and see it, and there were fingers that had been pulled out at that point, and there was a bit of damage to the face,” she said.

In the 1990s, the head and face that sparked these stories disappeared, leaving a cracked, headless top of the statue.

The Wallace sisters attempted to locate him with the help of the RCMP, even offering a reward and advertisement in the local newspaper. But the head never resurfaced over the years, so the sisters thought it had been broken or destroyed.

“Some kind of miracle”

After the photo was posted to Facebook by a family friend who visited the site, the cemetery keeper returned the head to the Wallaces’ home to keep it safe.

The face is chipped and the nose damaged, with a red coloration on the eyes, which look downwards. During the interview with Wallace, he was sitting on the kitchen table.

A descendant of the family who built the statue offered to restore it.

Kathleen’s sister Patricia Wallace said the statue was special to her Aunt Laura, and she is grateful that the head has been returned to her.

“It means a lot to us to know that the statue will be standing again and hopefully safe,” she said.

The white marble lady, who isn’t supposed to look exactly like Jennie Steeves, is expected to be restored this spring.

Kathleen Wallace said head stories and rumors were starting to circulate. She doesn’t know who was in charge or how it was made – and expects she may never know for sure.

“It was really kind of a miracle,” she said.

“It remains a mystery, maybe someone had a bad conscience.”

You are invited: “Global Advertising Law: Year in Review” from PLI – Media, Telecoms, IT, Entertainment