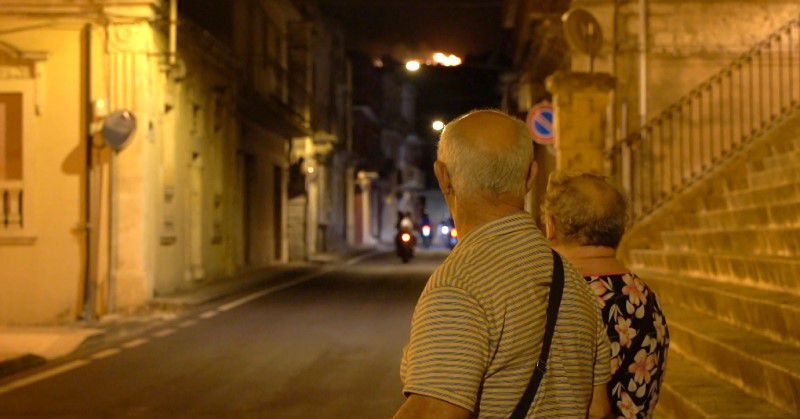 ROME, Aug.12 (Reuters) – Fires fueled by hot winds swept across southern Italy on Thursday, a day after a monitoring station in Sicily reported temperatures of 48.8 degrees Celsius (119.84 ° F) which some scientists believe may be the highest in European history.

The temperature record, which has yet to be verified by the World Meteorological Organization (WMO), was reported near the city of Syracuse, southeast of the island of Sicily.

“If the data is validated, it could become the highest value ever recorded in Europe, breaking the previous record of 48 degrees measured in Athens on July 10, 1977,” meteorologist Manuel Mazzoleni wrote on 3Bmeteo.com, a specialist site .

Firefighters said on Twitter that they had carried out more than 500 operations in Sicily and Calabria in the past 12 hours, employing five planes to try to put out the flames from above. They said the situation was now “under control” on the island.

Locals watch forest fires burning a pine forest in the village of Giarratana, on the island of Sicily, Italy on August 11, 2021 in a screenshot from a video. Content shot on August 11, 2021. REUTERS / Antonio Parrinello

Local media reported that trees and land were burning in the Madonie Mountains some 100 km from the Sicilian capital of Palermo and in the small town of Linguaglossa, on the slopes of the Etna volcano.

“Our little town has really been engulfed in fire. It is a disaster … We are living in really sad times,” said Giovanna Licitra, from the village of Giarratana in the south of the island which was hit by the fire. fires Wednesday.

Serious damage was also reported in Calabria, the tip of the Italian “boot”, where some families left their homes and where a man died on Wednesday.

Temperatures are expected to rise in several Italian cities, including the capital Rome on Friday, when the heatwave could reach its peak, according to a bulletin from the Ministry of Health.