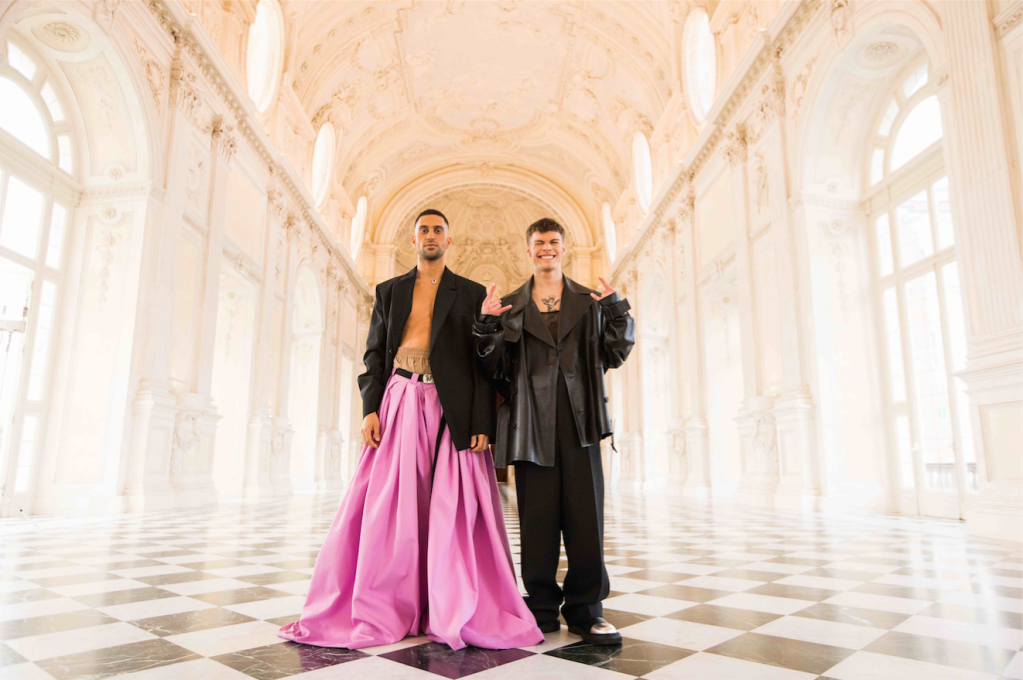 MILAN — Seeing Italian singers Mahmood and Blanco on and off stage are two completely different experiences.

The intensity they channel into singing their hit ‘Brividi’, the romantic ballad that had no competition for victory at the Sanremo music festival and which the duo will now take to the stage of the Eurovision Song Contest song in Turin, contrasts with the cheerful and fun attitude they have during press engagements.

“We are preparing to give the best of ourselves. A lot of people know we like to joke around, but when we’re on stage we’re completely focused on the music and creating the right harmony between us,” Mahmood said. “We’ve both sung ‘Brividi’ on our respective tours for the past few weeks, without each other, but when we sing it together the impact is so strong,” he added.

The artists met last summer at the studio of music producer Michelangelo – who will be on stage with them on the piano – and immediately clicked, deciding to collaborate right away. “We provoke each other, we joke a lot and sometimes we also argue. But we share great mutual respect and we are very happy to have faced this adventure together,” said Blanco, alias Riccardo Fabbriconi.

The chemistry between the two singers helped make the song relevant to local audiences from the start. With a title translating to “Chills” in English, the ballad is about love with an emphasis on the fear and vulnerability of exposing one’s feelings to someone, with the lyrics intentionally remaining vague about the parties involved or the type of relationship described to better enable everyone to relate to the words. The universal message of the song, the harmonization of their voices, as well as the simple staging, made it a powerful trio that the artists hope will also resonate with international Eurovision audiences.

Although they represent different generations – Mahmood is a Millennial, Blanco a Gen Zer – and have different backgrounds, musical styles and personalities, the artists are both part of a new wave of local musical talent promoting an image fresher and more inclusive of Italy, also by offering different visions of masculinity.

This approach inevitably trickles down to their fashion choices, with Mahmood often opting for tailoring with an unexpected twist and Blanco showing off his tattooed chest through see-through shirts (when he’s not half-naked).

“Fashion is definitely a very important language, it’s a way of communicating that has great relevance…it gives me another way to express myself,” Mahmood said.

Although he enjoys experimenting with different brands – from Burberry to Prada – Blanco has been a loyal man to Valentino for a year, having been asked by the brand for the musical project Boiler Room in 2021 and wearing Valentino outfits on numerous occasions, including including at the Sanremo Music Festival. More recently, his charismatic and anarchic personality shone in Valentino’s “Portrait of a Generation” advertising campaign photographed in London and strategically released ahead of the Eurovision Song Contest. Meanwhile, Calvin Klein welcomes the entertainer on his first trip to New York by taking him to Joe’s Pizza, challenging him to jump in the fountain in Washington Square Park in jeans and run through Times Square in his underwear. designer clothes.

While the two singers wanted to keep the details of their Saturday performance a secret, when appearing at the semi-final of the competition earlier this week, Mahmood opted for power couture in a gray Prada coat, while Blanco wore a total white look from Valentino.

Blanco stressed that the duo arrived in Turin “without too many expectations not to spoil this incredible experience” and are simply happy “to have the chance to sing our song in front of such a large and international audience and to represent our country. “.

Still, the pressure on their shoulders is great: to be the local entry after Måneskin – who will return as a special guest at the final, having won last year – is no easy task, as comparisons and expectations to match that level of success inevitably flooded social media. media and piled under the official “Brividi” video on YouTube which already has over 55 million views.

“Social networks are key tools for those who do our job, but it is just as important to be able to give them the right [importance] without being too influenced by the constant reviews received,” noted Blanco, who has 2.1 million followers on Instagram.

“We still feel the affection of everyone. We don’t particularly feel the pressure as we don’t approach this event as a competition but as an opportunity to put ourselves forward and get our song known to as many people as possible,” Mahmood echoed. He also praised Måneskin and the success they have had abroad, pointing out that “their victory played a very important role for all Italian artists who want to reach an increasingly international audience”.

Yet Mahmood has already witnessed the benefits of the European competition, taking part for the second time after winning the silver medal in 2019. Back then, he gained international popularity thanks to his hit “Soldi”, which talked about his upbringing. , scarred by his Egyptian father abandoning him as a child. The video of her performance of the song at Eurovision has reached 27 million views on YouTube, while the song’s official music video has been played 193 million times.

“I owe everything to this experience, it allowed me to open up to an international audience and to make my first European tour”, recalled Mahmood, defining “an honor” to represent Italy a second time in the competition.

“I want it to be like the first one. I want to have the same vibrations as Riccardo [Blanco] and approach everything with the same sense of discovery. This way I will enjoy it more, just like it happened in Sanremo,” he added.

When asked if he had any advice for debutante Blanco, Mahmood replied: “There is no advice, he is already good at what he does. I can just tell her to stay relaxed, I think the best way to experience this is with a total sense of freedom.

Anticipation for the other contestants’ performances is also building, with the duo admitting “there are a lot of songs we like, but if we have to choose, we think Kalush Orchestra [from Ukraine] are very strong,” Mahmood said.

“Yesterday they came to meet us and we sang together,” Blanco continued, addressing a video the Ukrainian band shared on Instagram about the encounter. “It was very emotional, something we won’t forget either for all they represent at this historic moment.”

Born with the full name Alessandro Mahmoud in 1992, just like Måneskin, the singer also auditioned for “X-Factor Italia’s” but in 2012, and was eliminated after three episodes. He returned to the music scene by winning Sanremo’s “Giovani” category – dedicated to emerging talents – in 2018 before winning the main competition trophy of the same music festival in 2019 with “Soldi”. Since then, he has climbed the music charts thanks to his distinctive musical style blending hip-hop, pop and Arabic influences and his personal lyrics, as evidenced by the hits “Gioventù Bruciata”, “Rapide” and “Inuyasha”.

On the other hand, Blanco’s rise to fame was super fast. In just one year, the singer, born in 2003, has caused a sensation among the country’s younger generations thanks to his anarchic attitude and a series of hit hits released one after another, including “Notti in Bianco”, ” Paraocchi” and “Mi Fai Impazzire. But with the song “Blu Celeste” and his performance in Sanremo, he revealed a softer and more personal side that made him a favorite with teenagers and their mothers.

After Eurovision, the two artists will resume their respective tours, which recently saw Mahmood perform in London and the Bataclan and Blanco of Paris hit base in all major Italian cities.

The candidates for the Eurovision Song Contest to discover

Eurovision Song Contest: A celebration of diversity and extravagant fashion

Watch out for Måneskin in this year’s Eurovision Song Contest

Italian media details Players on loan from Inter could cash in this summer, including Stefano Sensi and Sebastiano Esposito