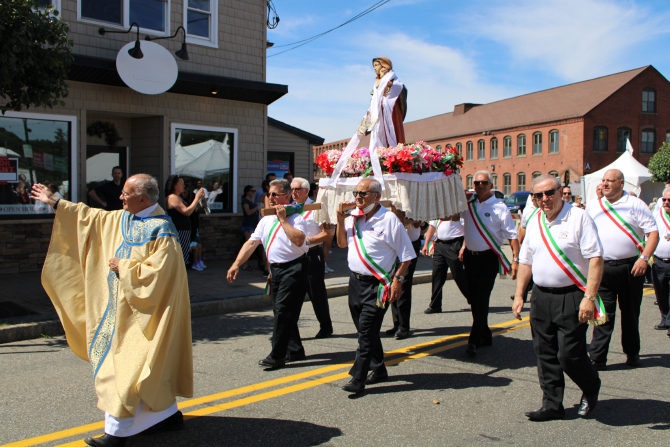 SOUTHINGTON — The sun was shining as a few hundred community members gathered on Sunday to celebrate the final day of the 17th annual Italian American Festival.

For a few hours on Sunday morning, Lower Center Street traveled back in time and brought a traditional Catholic Mass to town, making those in attendance feel like they were in a small village in Italy.

The mass was held next to the Sons of Italy clubhouse at the bottom of Wolf Hill. The neighborhood is known for being where Italian immigrants settled in the late 19th and early 20th centuries. In 1910, the Sons of Italy were founded, serving as a community beacon helping immigrants find employment.

The Mass opened with the Riti Di Introduzione (introduction) by Reverend Frederick Aniello, pastor of Mount Carmel Church in Waterbury, followed by a reading from the Book of Ecclesiastes.

There was also a minute of silence in memory of those who passed. A collection was made during the mass which will be distributed to churches in Southington.

Saint Paul’s Letter to the Colossians was read by Sons of Italy member Joe Dellaporta, followed by readings by Angelina DellaPorta.

Tina Parziale, a business owner in the city, explained that her father was from Naples.

“About a month ago I went to Naples to visit my family and I was able to see the procession of saints,” Parziale said. “Just to see it here in Southington I had to leave because I was crying and overwhelmed with emotion. It was so beautiful.”

Parziale told how she recently opened her boutique, Fable, down the street, and for her to begin her business trip to Southington, she felt was something extraordinary.

“To see him in this city is very special,” Parziale said. “I don’t think any other towns in Connecticut are doing something like this. I think it’s important to keep traditions alive.

Hundreds of local families joined Aniello after Mass for a procession downtown.

Aniello led the procession with the Sons of Italy as they carried the statue of the Blessed Mother around the block to celebrate their Italian heritage and carry on a piece of an ancient tradition.

Southington resident Carmela Salzillo proudly watched Mass with her grandson, who was happy to show off his Italian heritage by speaking the language.

“They do it every year around this time. Since COVID happened, they haven’t been able to do that for a year or two,” Salzillo said. “So it’s so fantastic that they were able to bring it back.”

Salzillo said she had been coming for five years with her family and her favorite part of the weekend was the procession.

“My favorite part is the procession and seeing the old Italian tradition here in Southington, where the men carry the law on their shoulders,” Salzillo said.

After the procession was the start of the last day of the weekend festivities.

Dawn Miceli, a festival committee member who handles the group’s marketing and communications, said money earned from the festival goes back to the event to pay for police, entertainment and firefighters.

“The kiosks today are non-profit organizations, and they raise funds for their groups,” Miceli said.