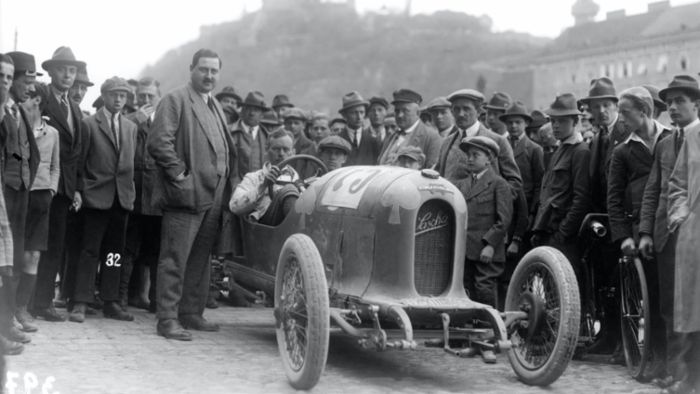 History of the Austro-Daimler ADS R

Ferdinand Porsche first met Count Alexander Joseph von Kolowrat-Krakowsky in 1921. This motorsport enthusiast was a partner of Austro-Daimler, the company where Porsche worked at the time. His nickname was Sascha. Porsche and Kolowrat talked about realizing a common vision: a small car built in large quantities at low cost. Porsche needed Austro-Daimler board approval for the car, but the board was skeptical. However, Porsche was convinced that positive publicity after a successful race would win over its detractors. In addition to the production version of his small car with its engine of only 1100 cc, he also built a racing version: the ADS R. As it was financed by industrial magnate and film producer Kolowrat, the car bears his name: Sascha. The result was a lightweight two-seat racing version of the planned four-seat series weighing just 598 kg.

Its water-cooled, 1.1-litre inline four-cylinder engine has twin overhead camshafts and is set well back in the chassis. This helped give a weight distribution of 53% front and 47% rear, and with two full gas tanks and two occupied seats, the load was evenly distributed. The second bucket seat was reserved for the mechanic, which was not uncommon at the time. The mechanic stowed the spare parts and tools in a wooden crate behind the seats, and the spare wheels were attached to the sides.

Although he left Austro-Daimler over disagreements, Ferdinand Porsche’s 17 successful years there proved to be a stepping stone, and he joined Daimler in Stuttgart in late April 1923. While working on the project car, he had met the men who would later be his first employees: Otto Zadnik and Karl Rabe. The latter would be his successor at Austro-Daimler.

A few years later, in 1931, together with his son-in-law Anton Piëch and former racing driver and businessman Adolf Rosenberger, Porsche founded the engineering office ‘Dr. Eng. hc F. Porsche GmbH, Konstruktionen und Beratung für Motoren und Fahrzeuge’. Porsche would continue to maintain the custom of testing developments in motorsport before moving to series production. And the company would continue to attach particular importance to the Targa Florio.

The four ADS R prototypes were not finished until shortly before the 1922 race. Only in the train did they paint the aluminum bodies of the Sascha cars red so that they did not stand out as much and are not stolen in Italy. To help distinguish them from a distance, Kolowrat had them adorned with playing card symbols.

His model was adorned with hearts, while Alfred Neubauer – the most successful driver and later Mercedes race director – got diamonds, Fritz Kuhn drove with spades and Lambert Pöcher with clubs. Count Kolowrat not only financed and directed the operation, but he also drove, entering the small sports cars of the 1.1 liter class, which started first. Later, the four Sascha pilots would describe the Targa Florio as “a strange race on breathtaking courses”. Cars started at two-minute intervals, which meant participants never saw who they were competing against.

The objective was to complete four laps of 108 kilometers each. In the end – after 432 km, 6,000 bends and gradients of up to 12.5% ​​– the first Austro-Daimler ADS R finished 19th overall. “Many strutted around with big engines a la Targa Florio, but the 598kg Sascha was a nimble guy with its 50bhp at 4500rpm,” says Achim Stejskal, Porsche Heritage and Museum Director. “At the end of the race, its average speed was only 8 km/h slower than the fastest cars with engines four or five times more powerful.

The Italian press hailed the fast and tough ‘mini car’ with a potential top speed of 144 km/h as ‘the revelation of the Targa Florio’. To spread the news beyond the Italian borders, Ferdinand Porsche ran big ads in the newspapers: “Austro-Daimler is the moral winner of the 1922 Targa Florio!” It was a claim disputed a few days later by Daimler, which placed its own large ads; Daimler had, after all, taken the overall victory. The members of the management board of Austro-Daimler AG – led by Camillo Castiglioni – had taken note of this as Porsche had hoped but were still not ready to approve the series production of the ADS.

Other successes did not change their point of view. Agile and efficient, Sascha followed up his class victory in the Targa Florio with a further 42 wins from 52 races – often under the watchful eye of the young Ferry Porsche. The board ultimately rejected the proposal once and for all, citing financial reasons, inflation, and the fact that Austria was too small to offer a decent market. They thought it was better to focus on the big six-cylinder models. The board’s decision and a dispute with Castiglioni led Porsche to leave Austro-Daimler and move to the parent company in Stuttgart. In 1924, Ferdinand Porsche took part in the Targa Florio with Daimler and received, among other things, the title of doctor honoris causa, a title which still appears in the name of the company today.

Porsche: the most successful competitor in the Targa Florio

What his father Ferdinand Porsche started a century ago as an employee of Austro-Daimler, Ferry Porsche has continued with cars under the family name, with the Stuttgart sports car manufacturer becoming a regular competitor in Sicily. And with 11 overall wins, Porsche was the most successful Targa Florio entrant of all time. In 1956, Umberto Maglioli claimed Porsche’s first outright victory in the 550 A Spyder. Maglioli’s victory evokes what the team led by Ferdinand Porsche and Count Kolowrat achieved a hundred years ago with the Austro-Daimler ADS R: beat a field of competitors with bigger engines. 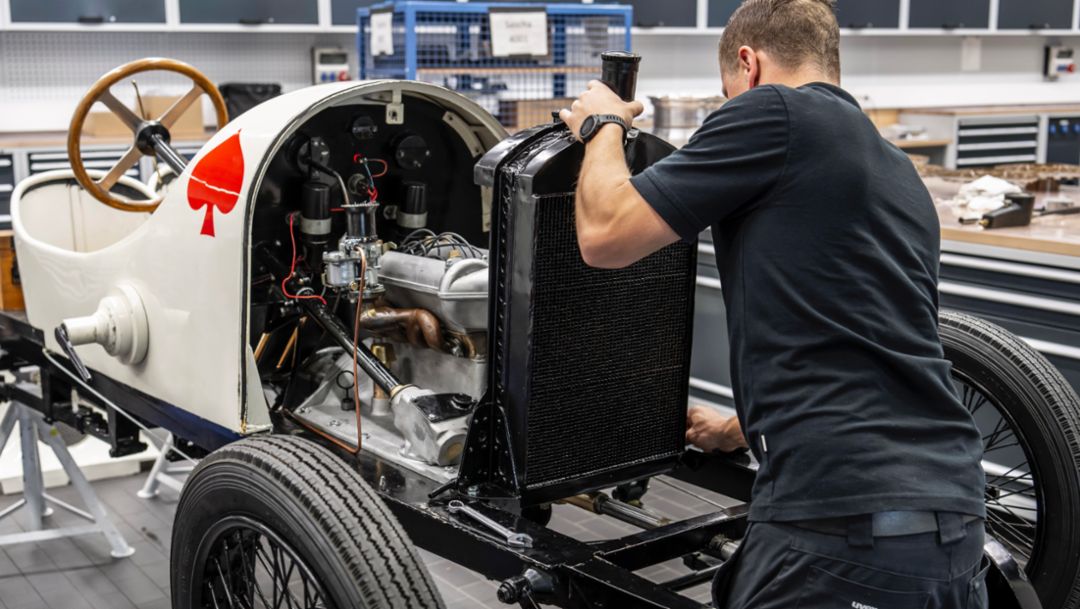 Restoration of the Austro-Daimler ADS R

Here you will find all information about the restoration of the Austro-Daimler ADS R. 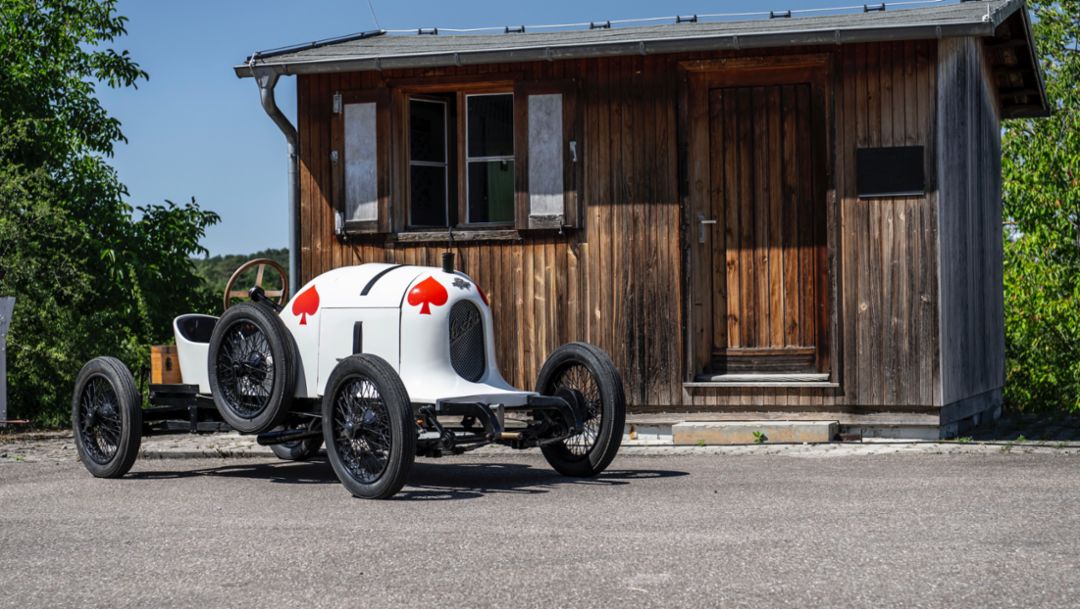 Here you will find all information about the technology of the Austro-Daimler ADS R.