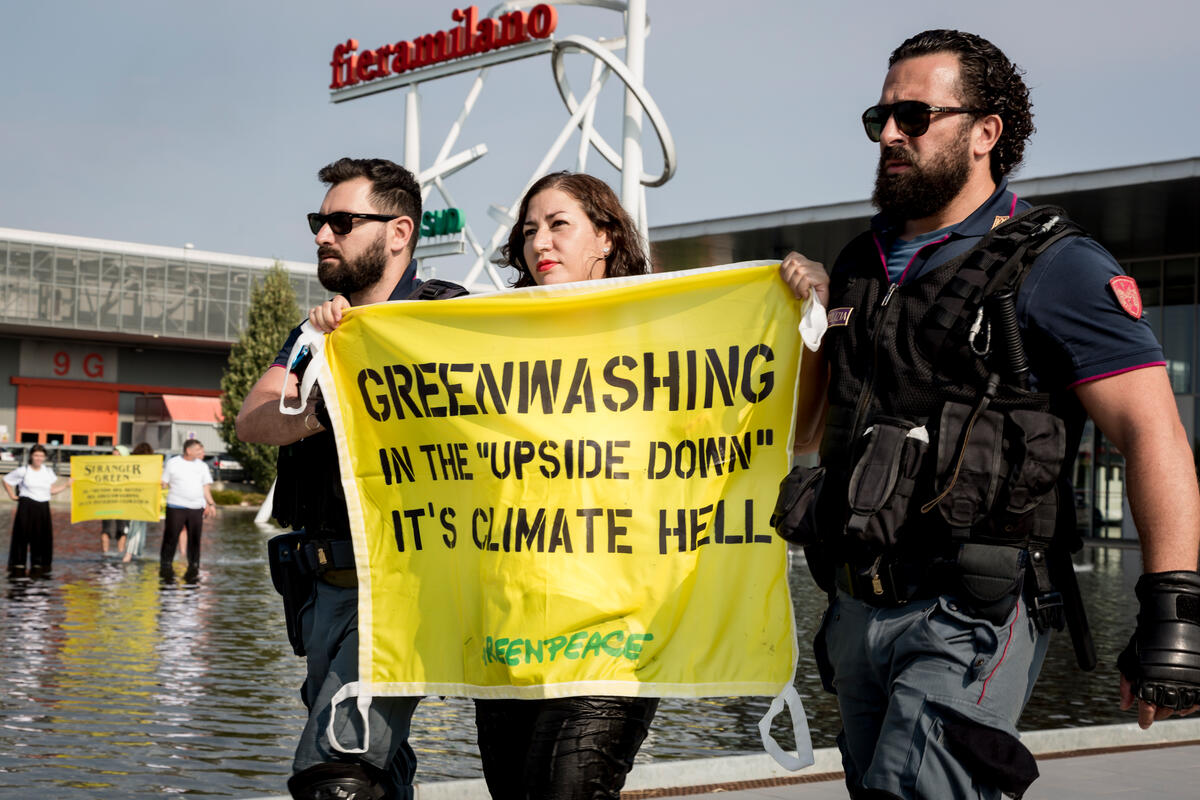 Milan, Italy – More than 50 Greenpeace activists from across Europe interrupted the opening ceremony of Gastech, the world’s largest meeting of gas, LNG and hydrogen companies.

Greenpeace Italy staged a peaceful protest at the Milan Fair, creating an atmosphere of ‘climate hell’ with smoke and sounds at the entrance to the site, illustrating what scientists say is the fate we face if we continue to burn fossil fuels. Outside and inside the exhibition halls, activists sounded sirens and broadcast an alarm message:

“Be careful, please! This is not a drill. The climate emergency is well underway. Do not believe the misleading advertisements of oil and gas companies. Greenwashing is climate hell”.

A giant balloon in the shape of planet Earth flew over the area in front of the fair carrying the messages “Gas is green… washing” and “End fossil fuels now!” “. Activists have also hacked into ad spaces with dozens of posters revealing what the oil and gas industry is trying to hide: a grim reality of pollution, increasingly destructive extreme weather events and disputes over control of fossil fuels.

Federico Spadini, climate activist at Greenpeace Italy, said: “We brought our peaceful protest to this event because for 50 years it has brought together the companies most responsible for the climate crisis. But there is something we can do to stop polluting corporate influence and political inaction: ban fossil fuel corporate advertising and sponsorship, which threaten people’s right to information and health. and the planet.[1]

Silvia Pastorelli, climate and energy activist from Greenpeace EU, said: “For years, fossil fuel companies have denied the existence of the climate crisis and their own responsibility. When denial became impossible, advertising became a means of greenwashing and diverting public attention from the fact that beyond the beautiful promises, their main activity remains one: extracting and burning fossil fuels. Now more than ever, in this time of energy crisis affecting millions of people, it is crucial to ban these toxic advertisements which only mislead consumers and help to enrich these multinationals. Without this publicity megaphone, it will quickly become clear that these are all dangerous lies.

Photo and video available at the Greenpeace media library.

10 unforgettable ice cream pubs through the ages | Analysis and Features