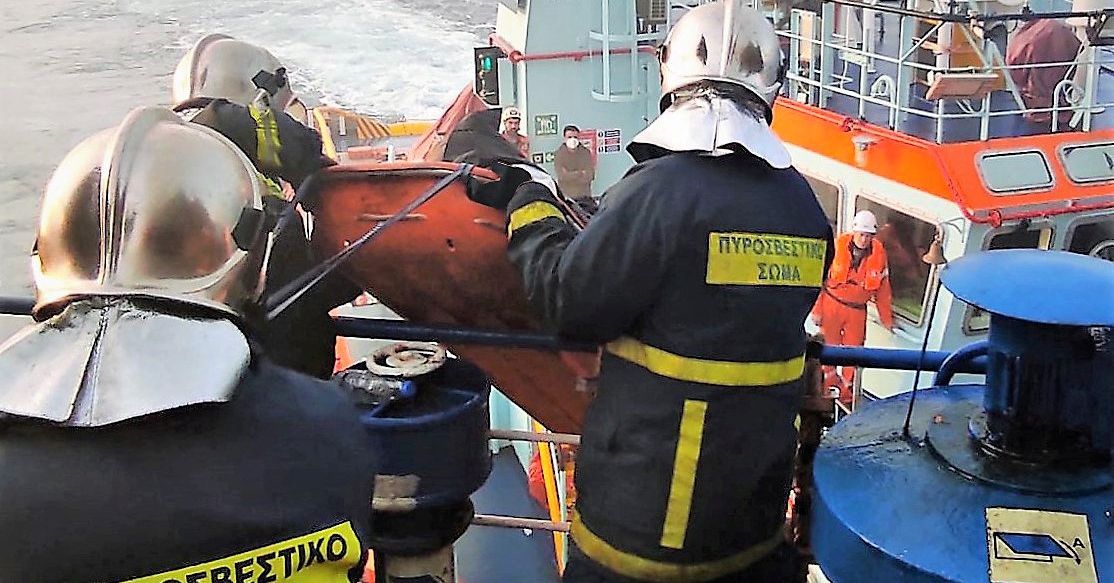 This is the first death reported after rescuers managed to get at least 281 of 292 passengers and crew to safety from a fire that broke out on the Italian-flagged Euroferry Olympia on Friday morning .

The ferry was en route to the Italian port of Brindisi from Igoumenitsa in Greece when it was engulfed in flames off the island of Corfu in the Ionian Sea.

Many passengers were truck owners or drivers transporting goods across Europe.

The dead man was found in the cab of a truck in the ship’s hold and had suffered severe burns, a fire official said.

A total of 10 people, all of Bulgarian, Turkish and Greek nationality, are still missing, according to the coast guard.

Firefighters remove a body from the Italian-flagged Euroferry Olympia, which sailed from Greece to Italy early Friday and caught fire, off the island of Corfu, Greece, February 20, 2022. Hellenic Fire Service /Handout via REUTERS

Earlier on Sunday, rescue teams found one survivor, a man from Belarus, in the back of the ferry, the Coast Guard said, rekindling hopes that other missing passengers could still be found alive.

Firefighters have been trying for days to contain the blaze and cool the scorching temperatures on the 183-metre (600ft) ship to allow emergency crews to board and rescue survivors.

The cause of the fire is still under investigation and a prosecutor has opened an investigation, according to coast guard officials.

Reuters footage showed rescuers climbing a stepladder to the ship after a tugboat towed it closer to shore.

Aerial footage released by the Greek Coastguard on Friday showed rows of burnt-out trucks on the blackened deck after flames swept through the vessel. The ferry was carrying 153 vehicles, the company said.

A group of truckers who survived the ordeal returned to Bulgaria in the early hours of Sunday.

“Once we were in the boats, we saw the huge flames. Everything burned, the losses are great, but I’m glad we’re alive and we’ll see our families again,” truck driver Rumen said. Cholakov on Bulgarian television Nova.