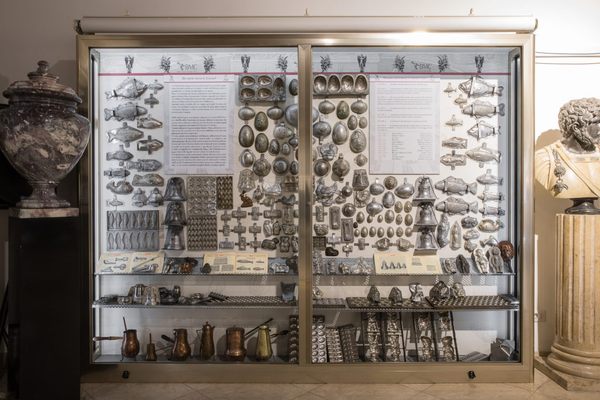 Stuck between the Circus Maximus and the Lupercal, where the city’s founders are said to have been nursed by a she-wolf, Rome’s new library and museum gives visitors a culinary perspective on history.

Founded in February 2020 by pastry chef and educator Rossano Boscolo, Garum isn’t the world’s first food museum, but there’s no other place quite like it.

Spread over two floors, visitors can enjoy the fruits of Boscolo’s four-decade journey spent collecting food artifacts. On the first floor, there are culinary curiosities such as 17th century ice cream moulds, several of the world’s first gas ovens and a playful kitchen dating from 1898. On the second floor, an antique library displays around 130 rare culinary texts, a 1517 edition of Bartolomeo Sacchi Dehonesta voluptate—the first practical cookbook ever printed – to a 1932 first edition of Filippo Tommaso Marinetti’s radical and controversial futuristic cookbook.

Garum director Matteo Ghirighini hopes the museum will allow visitors from all walks of life to immerse themselves in a more tangible shared history, through the collections themselves and through a series of ongoing tastings and lectures. After all, if most of us come to Rome to enjoy the best food in the world, why not find out more?