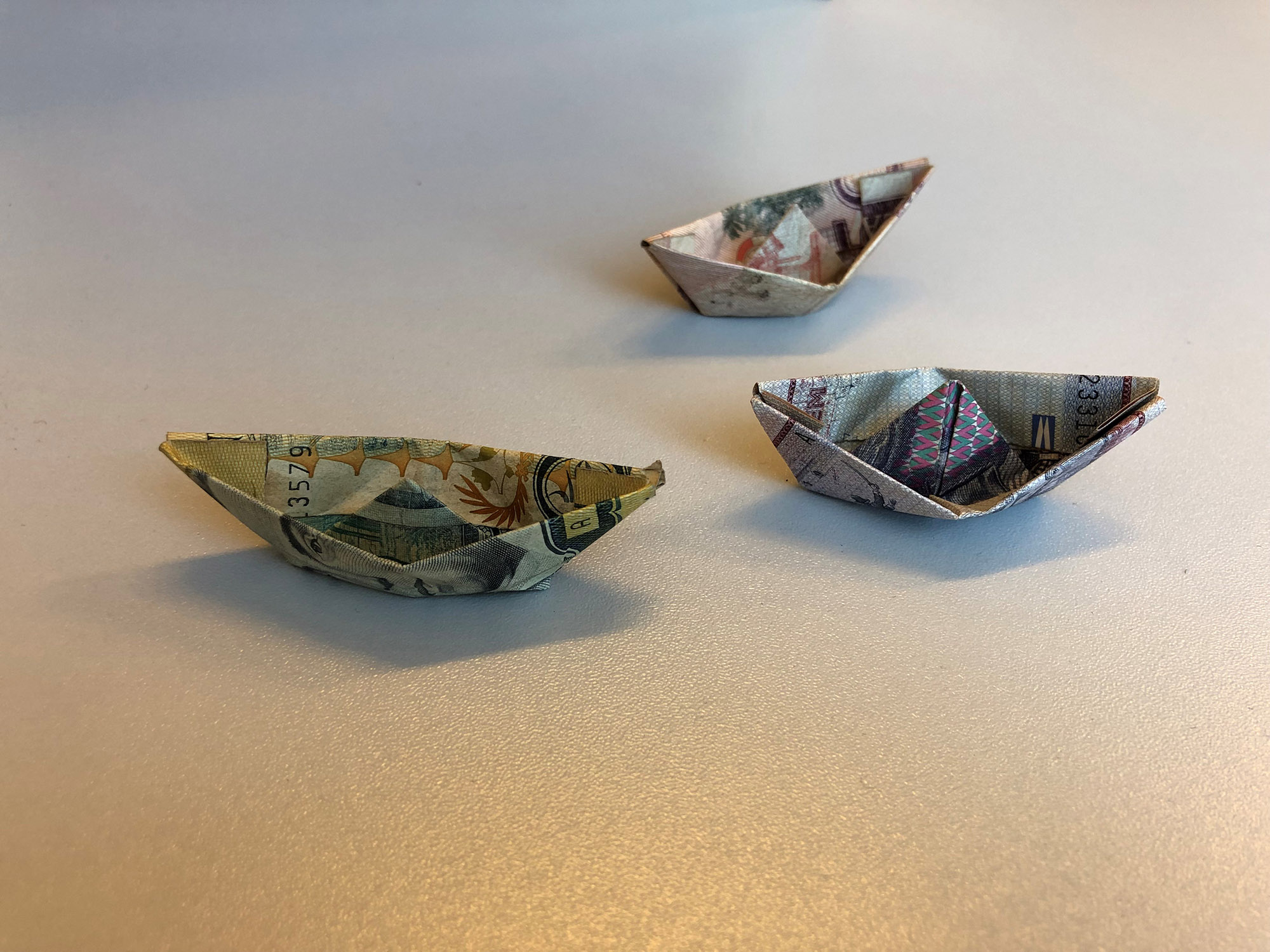 In Una película hablada (Talking film) (2017-19), playing in one of three spacious Williamsburg galleries at the Amant Experimental Art Center, Carla Zaccagnini tells the story of an Italian immigrant in Brazil who goes to buy a bottle of bootleg liquor and say: “keepwhich in Italian means “look” and in Portuguese means “keep it safe”. From the confusion of the Italian speaker, the film extrapolates an idea of ​​what it means to safeguard a good, highlighting the different methods of doing so, from monitoring it to concealing it.

The sculptures, installations, films and videos of Cuentos de cuentas/Accounts of Accounting, Zaccagnini’s first solo exhibition in the United States, contain similar anecdotes that are both deliberately naive and endearing. The artist, celebrated in Latin America and Europe for her works dealing with displacement, repetition and difference, approaches money not only as a metonym of American-Latin American relations, but also as a charged object, especially for those who find themselves geographically and culturally uprooted. Organized by Ruth Estévez, Director and Chief Curator of Amant, with Isabella Nimmo, Assistant Curator of Exhibitions and Education, and Sarah Demeuse, Head of Publications and Communications, the exhibition features installations, films, personal artifacts and written documents that illustrate the deleterious influence of the US dollar on Latin American economies in the 20th and 21st centuries. Together, the works tell stories of hidden safes, tricksters, political distrust and survival. At their core, they explore the idea of ​​inheritance, using money to tell an even more elusive story about family.

Depending on who you talk to, amassing and protecting your savings are acts that take various forms, sometimes incomprehensible. The relative weakness of the Argentine peso and the Brazilian real in the second half of the 20th century made it common for families like Zaccagnini’s to lose their savings overnight, which led to the artist’s father to hoard US dollars in a plastic jar buried in the floor of the family’s bathroom. So it’s fitting for Zaccagnini to meet the American public in a city whose residents routinely react to rising rent prices and pandemic-induced inflation in highly improvised ways, where cars sport makeshift cat decals and Plastic game tokens are used to pay for the bus. on the sly.

“Just like how each different layer of a cake has its own taste and texture, each layer of color in a well-constructed stack of bills also has its own density and softness,” Zaccagnini writes in an expository text. , reveling in the materiality of money in a dematerialized economy. His newly commissioned work Fleeting Feet (Flota fugaz) (2021-22) takes the form of paper boats made of devalued banknotes. By folding canceled tickets into boats, each with its own color and dignity, Zaccagnini alludes to an alternative economy in which these items circulate not as signs of anxiety but as emissaries of the imagination. However, just as the past is likely to dictate future actions, attitudes towards money and insecurity are often inherited from observation by previous generations and stored in memory as disturbing images, and these are highlighted in Zaccagnini’s main article, Cuentos de cuentas/Accounts of Accounting (2022). This five-channel video installation centers on stories from the artist’s childhood, when unstable currencies made it difficult to manage family finances and even more difficult to recover lost work hours due to hyperinflation. At one point, the artist’s hands, protruding from a red curtain, rescue a hundred-dollar bill from a jar of water and gently iron it to dry. The title cards provide a mental image of the artist’s father feverishly digging under the family bidet for the pot of money he had hoarded.

Zaccagnini sketches more detailed portraits of his family members in a series of short stories published bilingually in Spanish and English, in conjunction with the exhibition. In “Black Dollars”, her father nearly falls prey to a pair of con artists who offer to buy five cars from his dealer using dyed tickets that can only be cleaned with an expensive liquid sold by the con artists. In “The Vest”, the artist’s mother travels from Buenos Aires to São Paulo, clutching Zaccagnini’s hand and wearing a puffer jacket in which thirty thousand US dollars are hidden. Young Zaccagnini realizes, in the last sentence of the story, that the hand holding hers is sweating.

Money – especially in tangible denominations in which Cuentos de cuentas traffics – door, for so many stories and complicated associations. A story of clever tricksters is also that of a proud father taken for a fool; a story about the smuggling of banknotes across national borders is also about a child realizing his mother is scared. In this subtly haunting way, the exhibition brings to light the shame and longing that circulate in the shadows of global capitalism.