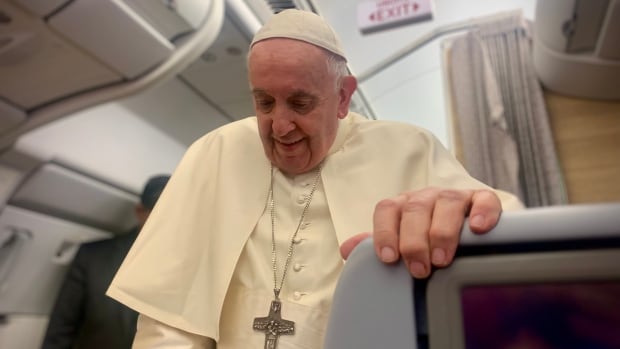 On a Thursday afternoon in late July, I found myself toasting with body heat from thousands of travelers surrounded by airport security.

I was on my way to Rome, assigned to cover Pope Francis’ six-day trip to Canada.

Little did I know that the long lines, waiting, and uncomfortable heat experienced at the airport would foreshadow much of my week covering his “penitential pilgrimage,” rather than interviewing residential school survivors about historical moments that have happened.

I received media accreditation from the Vatican press office and had to fly to Rome to board the ITA Airways charter flight carrying Pope Francis and his entourage to Edmonton, Quebec and Iqaluit.

Seated in the back of the plane were more than 70 journalists from around the world. Among the handful of reporters working for Canadian media, myself and Rome correspondent Megan Williams represented CBC News.

For most reporters on the flight, it was just another papal visit — the 103rd papal trip for a reporter I spoke to. But for me, it was an experience that brought me a lot of mixed emotions.

My great-grandmother spent most of her childhood at a Catholic boarding school in Spanish, Ontario.

Even though I never had the opportunity to know her, I can see how the lack of love and affection she experienced at the institution was transmitted from generation to generation. The inability to hug each other or say I love you is something I have experienced that is a direct result of intergenerational trauma.

It was somewhat heartwarming to hear the similar experiences of so many survivors and their families I spoke with prior to the papal visit, and it’s a perspective that most other reporters on the flight didn’t quite have. just not.

Myself and Brittany Hobson, an Ojibway journalist with the Canadian Press, were the only native journalists in the group. Although there were many more indigenous journalists on the ground at each event, I often felt embarrassed and isolated among the foreign press.

Journalists boarded from the back of the plane. When we were already seated, the pope was taken to the front by ambulift. Between us there were a lot of curtains and security guards, so I never got to see if he was spending his flights napping, watching rom-coms, or chatting.

Once in the air en route to Canada, the Pope was escorted to the back of the plane to deliver a brief speech. He then walked around the cabin, thanking and greeting each of us.

Although it was surreal to be so close to a religious leader revered by some indigenous peoples and despised by others, the trip did not live up to my expectations.

I was disappointed that the opportunities to speak with survivors and their families on the ground in Maskwacis and Lac Ste. Anne, Alberta, Quebec and Iqaluit were scarce for reporters on the papal flight.

We woke up early, were transported by bus to the event venues, and often waited in the hot sun (or rain) isolated from attendees awaiting the Pope’s arrival. The reaction of the indigenous peoples immediately after the event was also truncated by being driven back to the buses and plane for the next event by the organizers, the Vatican press office and much of the security personnel.

During the whole trip, the journalists had only one chance to ask Pope Francis questions. It was during a press conference on the plane between Iqaluit and Rome.

As the host nation, Canadian media also received two questions – and had to answer first. We had to reach consensus on two issues as a group. It was decided that I would ask a question about releasing a statement on the Doctrine of Discovery, as it was at the forefront of many discussions last week, while Brittany asked a question about the genocide.

I did not expect the Pope to ask me a question, wanting clarification and an example of how the Doctrine of Discovery is still used today to dispossess and disempower Indigenous peoples.

He didn’t really answer the question, but he answered Brittany’s question and said he considered the residential school system genocide – that was the common thread and headline for most of between us.

We were the only reporters to ask relevant questions about the trip. The foreign press has asked about his health, the church’s position on contraceptives and whether he considers himself more of a Jesuit than a pope.

If none of us were there, would this important moment have happened?

This is not the only time the foreign press surprised me. I saw a reporter doing a hit live for television while a Wendat elder performed a ceremony and Governor General Mary Simon addressed a small room of dignitaries. It was disrespectful, like every time a cameraman or photographer made a sarcastic comment when Indigenous reporters got in the way of their shot.

Problematic terminology, lack of trauma-informed reporting, harmful tropes and stereotypes are all things that are still prevalent in Canadian media, but are also taken to a new level with the foreign press.

Being aware that the papal visit was truly triggering for some survivors, their families and community members, I tried to put some lightness into the heavy media coverage by sharing photos of all the dogs I encountered. in Maskwacis, Lac Ste. Anne and Iqaluit.

Maybe I just missed my own dog, but meeting playful Fluffy and Daisy in Iqaluit was just the therapy I needed to get through the final leg of the tour.

When I wasn’t in reporter mode trying to file a story, I kept thinking about my great-grandmother. Would she have liked to hear the apologies? Would it have brought him healing?