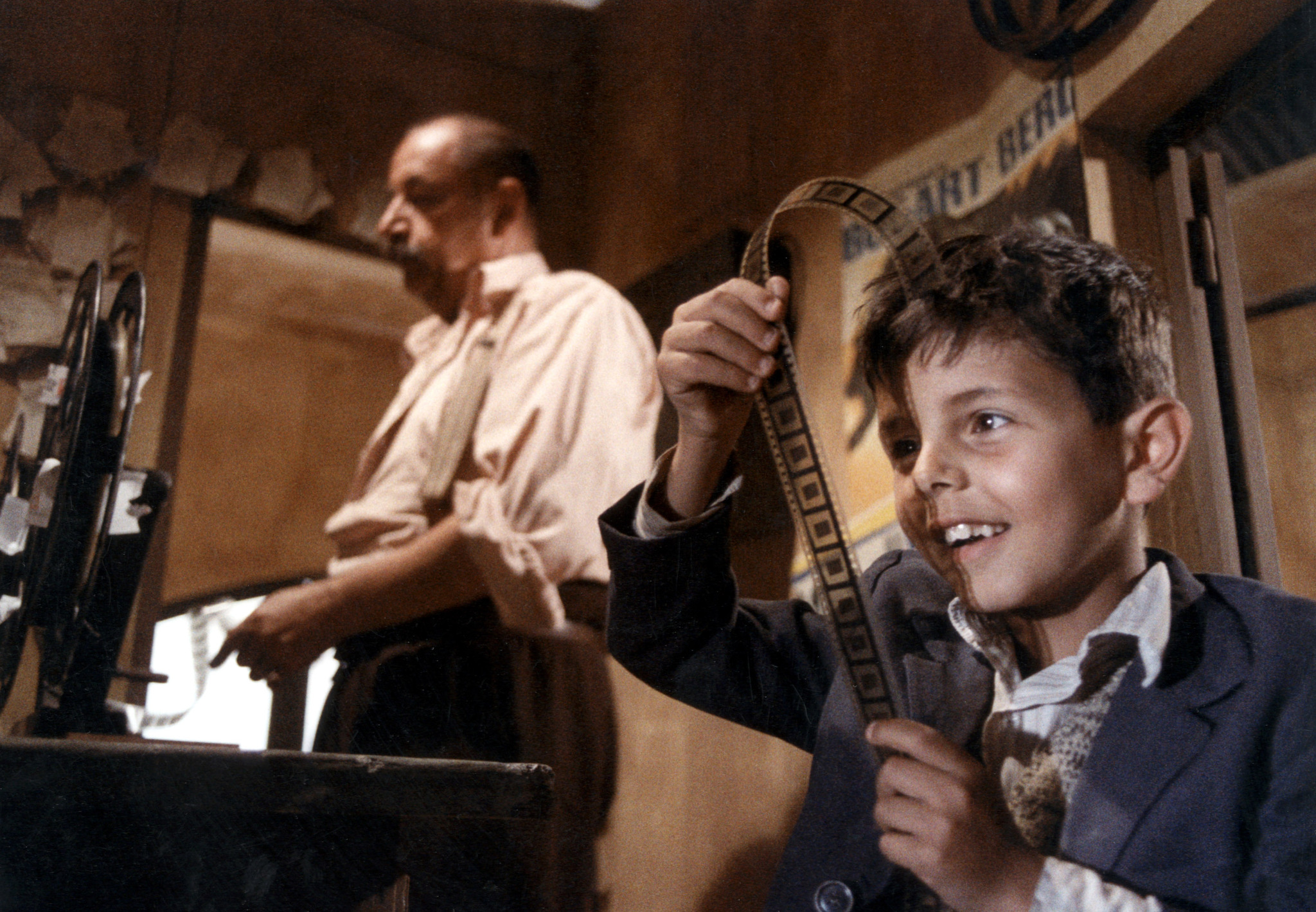 Few things are more powerful in this world than the effect a great movie can have on you. Cinema is the great emotional manipulator, and it is the one we welcome again and again as often as possible. It’s no surprise that a number of filmmakers have tried to tell their own stories about the power of cinema, but few have been as successful as the 1988 Italian classic. Paradiso Cinema. Rightly described as a love letter to cinema, this drama came out during a period of transition for Italian cinema and helped rekindle the urgency and creativity of this pocket of international cinema. With classic outsider quality behind it, Paradiso Cinema was initially released on more than one occasion with very little fervor before gaining a bump in Cannes and ultimately winning the Oscar for Best Foreign Language Film. The film mesmerized audiences on its release, but its timeless quality has allowed it to enter the hearts of many others over the past thirty years. It’s the type of story that helps you remember why you love going to the movies.

The whole story is framed through a nostalgic lens; famous director Salvatore Di Vita (Jacques Perrin, Z) receives the news in Rome “today” that an old friend has passed away. While it’s been decades since he returned to his childhood village of Giancaldo, Sicily, he knows he has to pay homage to one of the most influential people in his life. From there, the audience is entitled to a flashback that unfolds slowly and shows his journey from precocious young boy to respected adult. Young Salvatore is played to endearing perfection by Salvatore Cascio, first seen dozing off during church services – in which he fully participates. This kid doesn’t necessarily get bored with religious teachings, he’s just exhausted spending every possible moment at the local cinema, Cinema Paradiso. Alfredo (Philippe Noiret, Topaz) is the good older projectionist who has his hands full with Salvatore. While the exuberant child often sneaks around when not wanted or needed, a part of him truly enjoys passing on his love of cinema to young Salvatore.

Over the years, circumstances change in various dramatic ways and a now teenage Salvatore (Marco Leonardi) becomes more intimately involved in the management of Cinema Paradiso. Salvatore’s father has left his mother (Antonella Attili) a war widow, and the dynamic that develops between Salvatore and Alfredo transcends employer-employee. Despite Father Adelfio’s (Leopoldo Trieste) best attempts to censor moments of physical romance, Salvatore learns a lot about the world through cinema. Nonetheless, Alfredo learned the hard way about the need to live a life outside of the projection booth. Salvatore first tastes love with Elena (Agnese Nano), the daughter of a wealthy banker, but romantic love is not what director Giuseppe Tornatore is most obsessed with. This film is bursting with love for life in all of its complexities. Salvatore was raised with an entangled mind in the film, but the richness of life cannot be fully transposed on celluloid.

While one of the themes of the picture is living a busy life outside of the movie, Paradiso Cinema emphatically explains why people turn to the heartwarming rhythms of cinema so often. The feature offers multigenerational character growth, great romance, tragic loss, breathtaking interactions, stunning locations and much more. It not only shows the emotional impact that a shared experience can have, but how a special relationship can shape your future. Ennio Morricone’s score is one of the great pieces of music that has come out of the cinema in recent decades. The way the imagery dances with her is a thing of beauty. All crescendos to a now emblematic sequence that shows the beauty of cinema and of humanity. The story doesn’t have epic sets, but Tornatore’s direction makes the characters’ minor moments feel like they’re larger than life. Paradiso Cinema is an emotional pleasure for the crowd which simultaneously satisfies like a work of great art.

Paradiso Cinema makes its long-awaited debut on 4K UHD Blu-Ray with stunning 2160p / Dolby Vision transfer for theatrical cut that makes the movie look better than ever. It is the result of a 4K restoration overseen by director Giuseppe Tornatore and cinematographer Blasco Giurato. The 4K UHD version also features an accompanying Blu-Ray that sports the much longer Director’s Cut that was previously released by Arrow. The new 4K UHD drive offers notable improvements over the already solid previous Arrow Blu-Ray. The film has a nice amount of natural film grain which can be very thick but very tight and specific. This allows this film to shine and gives a lot of texture and nice detail to the transfer. The image exhibits a miraculous depth that gives this Italian place a more three-dimensional feel than ever. Some of the darker scenes are bulkier when it comes to grain, but overall it’s a very natural experience.

The improvements in contrast and overall clarity are noticeable, especially when looking at the exterior of city buildings or the textures of the costumes. The UHD disc contains very vivid and deep colors even with the shiny Italian frame really dazzling thanks to the cinematography. The white levels are brighter and offer more stability without veering off at flowering. The black levels are deep and allow the image to retain excellent depth and detail in darker environments. Skin tones look natural, and the clarity of the transfer gives you a great deal of facial detail, including some of the sweat from theater patrons fleeing the summer heat. This transfer is a treat for fans of this cinematic love letter. Arrow Academy got him out of the park!

The 4K UHD Blu-Ray disc comes with both a DTS-HD 5.1 main audio track and an LPCM mono track in the original Italian, which handle this material well in different ways. These tracks do not exhibit constant kinetic activity, but they do come to life when it makes sense. Ennio Morricone’s iconic score is used perfectly to set the mood for the story, and this track handles it elegantly throughout the film. There’s never a moment when he threatens to overwhelm competing sounds, and he maintains a good balance to keep the dialogue clear. Environmental sounds such as weather effects and the clamor of the townspeople are rendered well alongside everything else. There do not appear to be any notable cases of age-related wear. Arrow Academy gave this film a perfectly preserved audio presentation that brings the film to life in a thrilling way.

The first press of the Arrow Video 4K UHD Blu-Ray from Paradiso Cinema includes a booklet containing the essay “Stolen Kisses: Tornatore’s Paradise Cinema” by writer Pasquale Iannone. This essay provides an excellent historical context for the film in Italian cinema as well as an overview of the film’s release and themes of the story. The special characteristics of the disc are as follows:

Paradiso Cinema is an amazing reminder of why we fell in love with cinema in the first place. This coming-of-age tale has all the happy highs and crushing lows that life has in store for you, but when you come to the end the story surrounds you in utter beauty. Director Giuseppe Tornatore does a truly amazing job putting all the technical elements together to make sure the film is emotionally successful. Arrow Academy has released a 4K UHD Blu-Ray with a stellar A / V layout and a nice assortment of special features. As well as having the Director’s Cut also presented in 4K, fans of the film couldn’t ask for better. Highly recommended

Paradiso Cinema is currently available for purchase on 4K UHD Blu-Ray and Blu-Ray.

Note: The images shown in this review do not reflect the picture quality of 4K UHD Blu-Ray.

Disclaimer: Arrow Academy has provided one copy of this disc free of charge for review. All opinions in this review are honest feedback from the author.

Dillon is more comfortable sitting in a movie theater all day watching both big budget and independent films.